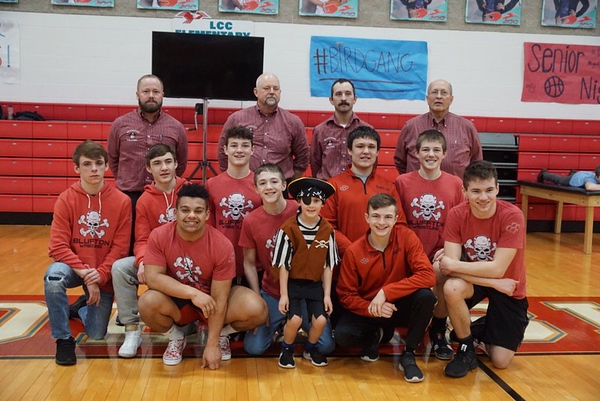 Nassar had a quiet weekend on his way to a first place finish. Nassar won by pin in the quarterfinals in just 23 seconds and followed it up with a pin in 21 seconds in the semifinals.  Danny Rosales of Ottawa-Glandorf, defaulted in the finals and Nassar was awarded the victory. Deandre improved to 40-0 on the season after this weekend’s action.

Freshman Kaden Basil defeated #2 seed Gabe Sutton by an 11-4 count in the semifinals.  The loss was just the third of the season for Sutton. Basil lost 15-3 in the final to top seed Brian Chiemelwieski of Coldwater.

Sophomore Josh Mehaffie won matches by 10-3, 10-1 counts before advancing to the final of the 138 class with a 4-1 win over Allen East’s Hunter Paxson.  In the final, Mehaffie was pinned by top seed Ethan Meyer of Parkway.

Sophomore Tayton Kleman lost to LCC’s Gavin Caprella in the semifinals but rebounded in the third place match with a 2-0 defeat of Allen East’s Jordan Kennedy.

Sophomore Jeremy Sturgeon defaulted in his semifinal match and followed it up with two wins in the consolation bracket to nab third place of 126.

Freshman Jackson Wilson was pinned in his opening match against Wyatt Stabler of Wayne Trace.  Wilson navigated through the Consolation Bracket picking up back to back wins and met Stabler in the third place match.  Stabler won the rematch but Wilson advanced to Districts with the fourth place finish.

Bluffton will wrestle Friday and Saturday at Troy with the top four in each class advancing the State Wrestling Meet the week after held in Columbus at the Schottenstein Center.