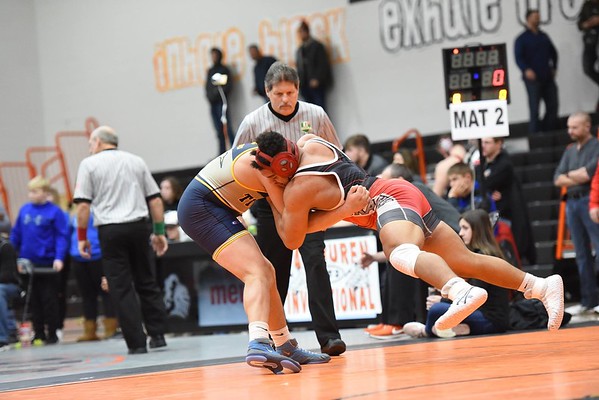 Nassar improved to 22-0 on the season and won his first VBI title.  In Saturday's semifinal, Nassar advanced via forfeit as Mohawk High School decided not to travel in the inclement weather.  In the final, Nassar earned a 3-1 sudden victory over Ottawa Glandorf's Danny Rosales.  The two wrestlers met in the final at the Defiance Border Wars in late December as well with Nassar winning in similar fashion.

Luginbuhl dropped the third place match at 220 by an 8-2 count to Will Bechstein of Elmwood. Bechstein was able to defeat Luginbuhl on Friday.

Basil lost a 7-6 decision in the third place match at 113. The freshman had another strong showing this weekend as he raised his record to 17-8.

Kleman dropped a 7-2 decision to top seeded Gavin Owens of Eastwood in the semifinal match Saturday morning. Tayton responded with a pin in the consolation semifinals but fell 6-3 to St Marys Central Catholic's Will Blevins in the third place match. Blevins was the second seed at 106.

Sturgeon won his consolation semifinal by forfeit and dropped the third place match to Allen East's Drake Carmean by an 18-3 count.