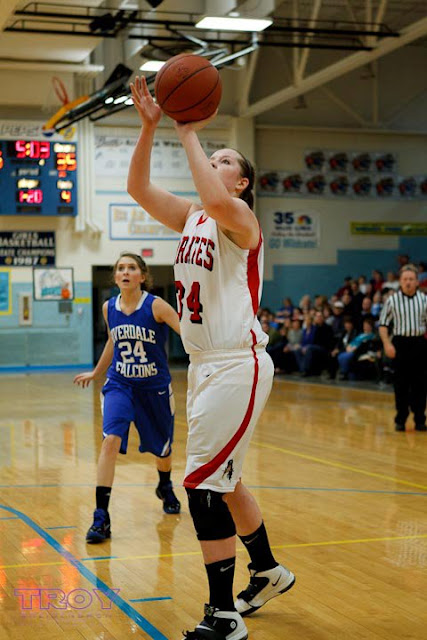 Down by 15 to Riverdale entering the fourth quarter, the Bluffton Lady Pirates could’ve rolled over and waited for the final buzzer.  Instead, they fought back, opening the fourth on a 14-3 run to cut the Falcon lead to four.  The Pirates could get no closer though as Riverdale made four of four free throws in the final two minutes and won 41-31 in the opening game of the Bath Holiday Tournament.  BHS will face Lima Senior in the Consolation Game Thursday night.  Bath beat Senior 72-44.

The Pirates, who hadn’t played since December 16, started slowly, shooting just 1/8 from the field in the first quarter.  The Falcons got off to a 13-2 lead.  There was a scary injury with just seconds left in the first quarter as Falcon player Mallorie Hicks tumbled to the floor on a layup attempt and wasn’t able to get up.  The game was delayed for 20 minutes as trainers and eventually EMT personnel helped Ms. Hicks onto a stretcher.  We hope nothing but a speedy recovery for Mallorie and that the measures taken tonight were purely precautionary.

Bluffton won the second quarter 13-8 as the Pirates began to move the ball and showed good signs of life on the offensive rebounding of Molly Lengyel and Bailey Prichard who each scored four points in the quarter.   The Pirates forced five Riverdale turnovers in the quarter, cutting the lead to 21-15.  The third quarter was a tough one for BHS as they started the half with six turnovers before Sami Harrod scored on a layup for Bluffton’s only points of the quarter.  The Falcons went on a 8-0 run to end the quarter and push the lead to 32-17 after three.

But things changed in the fourth as the Pirate 2-3 zone forced three straight turnovers to start the quarter.  Sierra Amstutz scored in the lane, followed by Paige Buroker’s second three of the night to cut the lead to 10.  Harrod drained a ‘3’ the next trip forcing a Falcon timeout.  Prichard scored in the lane from a Buroker assist.  Bluffton switched defenses to a 1-3-1 and forced back to back turnovers once again.  Harrod nailed yet another ‘3’ to cut the lead to 35-31 with 4:10 to play.   The Falcons played keep away the remainder of the game and then knocked down free throws to keep Bluffton at bay and secure the win.  BHS is now 2-6 on the season.