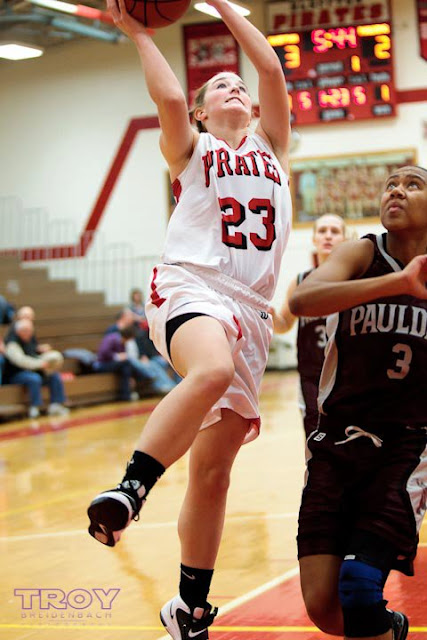 Bluffton and Paulding fought down to the last shot, only the Pirates couldn't get one off.  Eight fourth quarter turnovers doomed BHS as they fell 47-45 to the Panthers in a home Northwest Conference game.  Bluffton is now 2-5 and has 13 days before their next game, against Lima Central Catholic at the Bath Holiday Tournament.

Paulding's height advantage and hot outside shooting helped the Panthers build a 26-20 halftime lead.  In a physical game where post player Molly Lengyel took a ball to the face, Sami Harrod twisted an ankle and four players fouled out, the Panthers made the plays down the stretch to take home the victory.

BHS trimmed the lead to 36-33 after three quarters behind solid play.  Harrod canned a '3', Mariah Welch made a baseline jumper and Lengyel and Harrod each went 2/2 from the line.  The Pirates kept the momentum going into the fourth as they took their first lead at 38-36 on two free throws from sophomore Sierra Amstutz.  Welch flipped in an awkward bank shot to finish a 9-0 run to give Bluffton a 40-36 lead with 5:30 left in the game.  The Panthers battled back as they forced turnovers on three of Bluffton's next four possessions.  Still, free throws kept the Pirates in the thick of it as Paige Buroker and Bailey Prichard gave the Pirates a 44-43 lead with 2:44 to go.

Turnovers on the next two Pirate possessions combined with some stout Paulding defense prevented any scores the next four trips down the floor.  Still, an Amstutz free throw made it 46-45 Paulding with 29 seconds to go.  Welch stole the ball on a double team but missed a runner on the left baseline to tie.  After a quick foul, Paulding hit one free throw to go up 47-45 with just eight seconds remaining.  The Pirates couldn’t get a shot off as a pass was deflected and Paulding took possession to close out the game.

The ending spoiled a balanced scoring attack for Bluffton.  The team’s three seniors led the way as Lengyel and Harrod each scored 10 and Welch had 11.  Prichard added eight points and five boards, all in second half action. Sierra Amstutz and Paige Buroker each added three points.