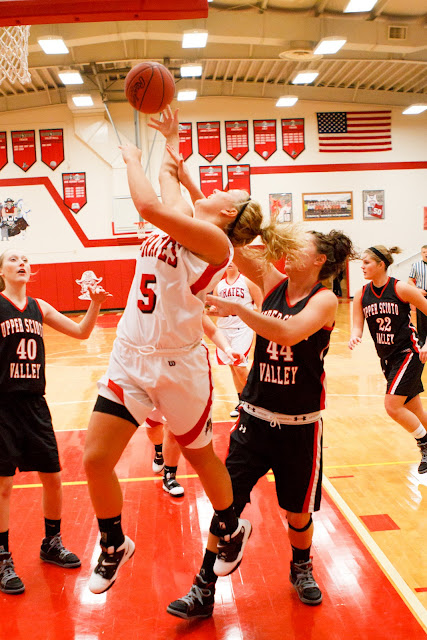 A five minute stretch turned out to be game changing Tuesday night in a 63-51 Upper Scioto Valley victory over Bluffton in the Treasure Chest.  USV outscored BHS 21-7 over the final six minutes of the third quarter, creating space on the scoreboard for the 12 point win in the competitive contest.  Bluffton falls to 1-2 on the year.

Upper started strong, building a 17-12 lead after the first quarter.  The Rams used full court pressure all game long, but it was especially effective early on as BHS committed eight turnovers in the first eight minutes.  Eventually the Pirates settled in, breaking the pressure and creating good shots on offense.

Down five entering the second quarter, the Pirates battled back behind the strong play of post player Molly Lengyel.  The senior scored 10 points in the first half and grabbed three offensive boards for putbacks.  Lengyel’s bucket with 1:21 left gave the Pirates their first lead at 24-22.  Bluffton held a 29-28 advantage at the midway point as they collapsed on USV’s leading scorer down low forcing USV to crank up shots from outside.

The third quarter proved to be fateful for the Pirates as a myriad of things didn’t go their way.  For starters, the Rams seemingly couldn’t miss from the field as they poured in 23 points in the quarter while holding BHS to just nine.  USV went 9/10 from the free throw line during the third as they turned a one point half time deficit into a 51-38 lead heading into the fourth.  “We had some defensive lapses in the third.  And it doesn’t help when you send a team to the line 26 times in a game, especially when they make 20 of them,” Coach Dennis Lee added after the game.  The Pirates couldn’t crack the ten point barrier in the fourth as the Rams made enough plays down the stretch to hang onto the 63-51 win.

Bluffton’s three seniors again led the squad in scoring.  Mariah Welch and Sami Harrod each scored 12 and Lengyel added 10.  Sierra Amstutz added 8 points and 4 rebounds.  Bailey Prichard scored six and Anna Crisp had three to  round out the scoring.  BHS next plays Saturday afternoon when they host Fort Jennings.