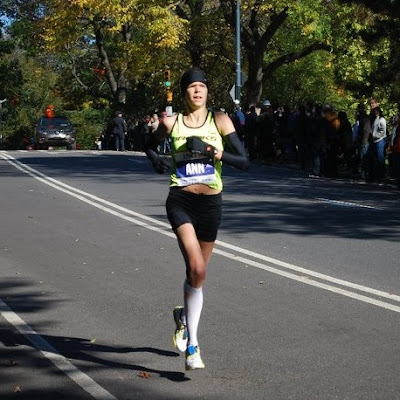 Ann Alyanak in the NYC Marathon

She's still going.  Ann (Stechschulte) Alyanak is still running strong and turning heads as she goes.  The 1997 Bluffton High alumni finished 32nd in the New York City Marathon last weekend and punched her ticket for the 2012 Olympic Marathon Trials in hopes of making the United States team to run in London at the 2012 Olympic Games.

To finish that strongly in an elite race would be a thrill of a lifetime for most runners but the result wasn't quite what Ann was gunning for.  “Going into the race, I was hoping to place in the top 10 Americans and the top 20 overall.”  The race didn't go as well as Ann mapped out.  Just three miles into it, her heel was clipped by another runner and Stechschulte hit the ground hard.  She wasn't seriously injured, but bruised, battered and bleeding isn't the best way to competively cover 26.2 miles.  Thing settled down for Ann over the next few miles but around mile 19, “I was having some stomach issues which made for a really long last 10k.  It just wasn't my day.”  The clock read 2:43:58 as she crossed the finish line, good for 32nd among women and 14th among United States women.

Still, the ultra successful distance runner is on her way to the US trials where she hopes to make the team for 2012.  In 2008, Ann finished seventh in the 2008 trials, run in Boston.  The top three spots are rewarded with Olympic team spots, while the next three finishers are named as team alternates if one of the top three are unable to perform.  Ann will be looking to finish in the top three this Olympic cycle, which will culminate in the Olympic Trials on January 14, 2012 in Houston, TX.

Leading up to the NYC race, Alyanak put in “quite a few weeks over 100 miles” getting prepped for one of the nation's premier marathons.  She added, “I typically run twice a day most days of the week to get all the miles and workouts in.”  Ann definitely has more on her plate than training for long distances.  13 month old Eddie joined the Alyanak family in September 2009 and keeps Ann and husband Ed on the run.  “Sometimes I take Eddie in the baby jogger for easy runs and he enjoys it.  Eddie helps keep everything balanced and in perspective.  If I have a bad race or workout, Eddie doesn't care and he can always put a smile on my face,”  the proud mother relayed.

For the past six seasons, Ann has coached the University of Dayton Cross Country teams but stepped down in June to focus on her family and running career.  In 2009, she was named the Atlantic 10 Coach of the Year as the Dayton squad were crowned A-10 Champions for the first time in school history.

Ann was a three time state champion while at Bluffton, winning the 1600 her junior year and the high jump and 800 her senior season.  She then went on to Purdue University where she was an  All American in the 10,000 meters.