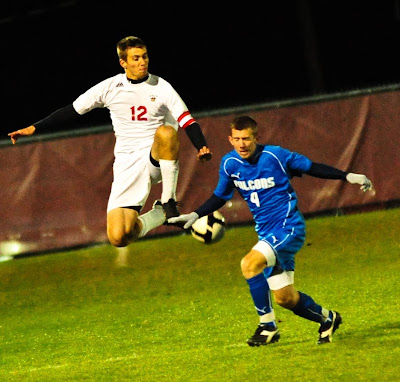 Originally scheduled for Tuesday evening, October 26, the Boys Division III District Soccer Semi-Final was finally played last Thursday night at Steinmetz Field.  Bluffton, the number two seeded team, fresh off of a 7-1 victory over Ada, faced number one seeded Riverdale.  Riverdale advanced to this point with a 5-0 win over Cory-Rawson.  The end result was a 4-3 hard fought win by the Riverdale Falcons.

Tuesday's storm created the postponement of the originally scheduled game, but Thursday's weather suited the Falcons just fine for quick strikes on the Pirate defense.  Despite the usual crisp passing and effective ball-control offense they have been known for, it was the continual brief defensive lapses that also allowed this opponent quick goals with short possessions deep into the Pirates defensive zone.

Oddly, the seven goals did not include two in a row by either team.  Riverdale struck first when Falcon leading scorer Jon Grant sent a deep lasered shot from his left foot to the back of the Pirates net with 31:35 remaining in the first half.  At 17:53 of the half, Pirate sophomore Nathan Bunch took advantage of a deflected shot by junior Lucas Harnish when the Falcon goalkeeper came out of the net and could not cover Bunch's return shot.  Next Falcon Eric Eatherton sent a rocket high and to the middle of the Pirates net for the 2-1 lead at 9:28.  Sophomore Matt Deter worked through heavy traffic and tied the game at 2-2 for Bluffton at the 2:08 mark to close out the first half scoring.

It was the Falcon's turn to score again and Caleb Shultis led off the second half with a deep shot from the center of the Bluffton zone at 30:40 for the 3-2 Riverdale lead.  Bunch again lit the scoreboard at 18:55 for the Pirates on a nicely assisted pass by senior David Hooley to tie it up at 3-3.  Finally, Riverdale scored the game winner when Nathan McKee converted a Falcon corner kick into the Pirate net at 14:57 for the 4-3 Riverdale win.  For the game, Bluffton outshot their opponents, 8 to 5.

Bluffton bowed out of the season with a 6-11-1 record.  For the five seniors, the opening round Sectional win was nice, but not satisfying.  They had hoped for another game versus Ottawa Hills, a team they beat in last year's District Final, and coincidentally, the stated highlight of each player's career.  The outstanding senior class of Jackson Bush, Jeremy Enneking David Hooley, Zach Shaw and David Yoder will certainly be missed on the Bluffton pitch next season.  Their character and class on and off the field was something to admire.

Senior co-captain Hooley summed up the season, "Overall, I think we have played really well as a team with all the injuries and other problems we have had. We have stepped up our play towards the end of the season, and that is just what we needed. I have had an amazing time playing soccer at Bluffton. The coaching has been superb and my teammates have been great as well."

Co-captain Yoder echoed similar thoughts.  "It has been a great character-building season for me. After great success in the past, it was frustrating to lose game after game. However, our team has really pulled it together here at the end of the season and I am so proud of the young guys. They have really improved since the beginning of the season and I believe they have a bright future ahead of them. As my soccer career at Bluffton comes to a close, I am glad to have had the opportunity to play with some great players and teams. Some of best my high school memories took place on the soccer field. This sport has meant a lot to me and I will miss it a lot."

One silver lining in this season has been the emergence of a large class of freshmen players who received significant playing time in their first varsity season.  This class includes Andrew Hoff, Jonaton Moser, David Nester, Ryan Sprague, Stephen Tatarkov and Bill Theisen.  Additionally, several injured players hope to return to the squad next season.