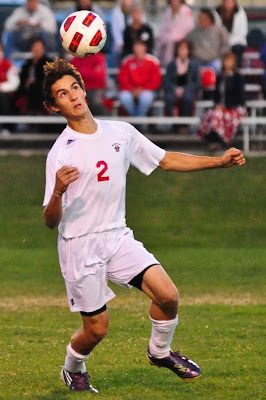 With a home Division III Sectional Soccer Tournament looming, the Bluffton High School boys soccer team wanted to finish the regular season strong.  In their final two games, they lost 2-1 at Kalida to an undefeated team and won the finale at home for Senior's Day against Continental, 3-2.

On Tuesday, October 12, the Pirates traveled to Kalida to face a team that had eleven wins and three ties in their first 14 contests.  And unfortunately for the Pirates, the number 14 would be their undoing.  The Wildcats forced 14 corner kicks in the game and both of their scores came from those opportunities.

Kalida only outshot Bluffton 10 to 7, but took full advantage of their circumstances, unlike the Pirates.  Bluffton appeared to have superior ball-handling abilities throughout the game, but could not parlay that into more than one goal.  Cody Horstman scored the game's opening goal on a nice corner kick by Jeremy Kahle for the Wildcats in the eleventh minute of play for a 1-0 Kalida lead.

In keeping with the game's theme of all scores being created by corner kicks, Bluffton struck next four and a half minutes into second half to tie the score at 1-1.  Senior Zach Shaw booted a perfectly placed ball in front of the crowded Kalida goal.  In a perfectly timed and placed move, senior David Hooley headed the ball past the Kalida goalkeeper Drew Stechschulte.  Finally, Wildcat Cody Schnipke finished out the scoring for Kalida and the game on yet another corner kick with 28:11 remaining for the final 2-1 winning margin.

Bluffton fell to 4-10-1 with the loss, but played a strong team fairly evenly throughout the contest.  Kalida raised its record to 12-0-3 with the win.