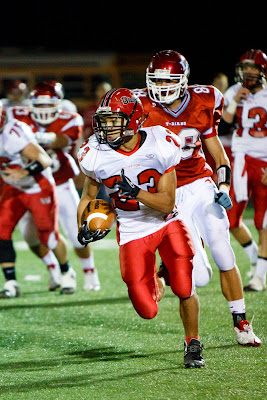 Bluffton got the privilege of playing the rare Saturday night ball football game last week, traveling to down I-75 to take on LCC.  While the Pirates hung around early, LCC did their best Wisconsin impression, pulling away for a 47-7 victory.  Bluffton dropped to 4-4 while LCC won their seventh straight to get to 7-1.  Bluffton hosts 2-6 Paulding Friday night in another NWC game.

For the first few minutes, things looked to be tight with the Thunderbirds, who share a stadium with Lima Senior, forcing a Saturday evening game.  LCC struck first on a 53 yard scamper by Bubba Krieg.  The Pirates were not daunted though and they looked to strike back in one play.  Quarterback Hunter Joseph threw long down the right sideline to a streaking RJ Stratton who couldn't come up with the catch and run.  Regrouping, Joseph handed off to wideout Drew Luginbuhl who took off up the right sideline after a great seal block by Christian Koch.  Luginbuhl was run down from behind at the LCC three yard line.  Jeremy Basinger plunged in behind the left side of the offensive line of Ben Moser and Logan Sturgill and the Pirates had tied the game at 7-7.  The T-Birds kept on chugging from there on while the Pirates hit a bit of a lull.

LCC junior quarterback Ty O'Connor found Krieg on a slant screen for a 78 yard touchdown pass on LCC's next possession.  On the first play of the Pirate's next drive, O'Connor picked off a pass by RJ Stratton on a trick play to setup LCC's next drive.  The Birds drove 52 yards in six plays with O'Connor punching it in from a yard out to make it 21-7.  The teams traded punts before the next big play.  On second and seven, Joseph dropped back to pass and tossed but O'Connor was there again, this time picking the pass off and taking it to the house for a 28-7 lead with 6:54 left in the half.  BHS was held to three and out ad LCC again drove the field for a touchdown to make it 35-7.  O'Connor finished off the half with a 41 yard field goal to make it 38-7 at the break.

The Bluffton band did a great job at halftime, thrilling fans with their Michael Jackson set.  Any hopes of a Pirate comeback were quickly dashed as Krieg returned the opening kickoff of the second half 83 yards for another T-Bird touchdown.  LCC tacked on a blocked punt for a safety to round out the scoring midway through the fourth quarter.

The Pirates were held to 135 yards on the evening and just four first downs.  Luginbuhl was the leading rusher with 105 yards, including the 77 yard dash.  Jason Myers led the defense with six tackles including three for loss.  RJ Stratton added six tackles from the defensive backfield.  Logan Sturgill and Ben Moser each had a sack on the night.  Christian Koch punted seven times for a 32.8 average.

The Pirates will look to go back above .500 on the year Friday against Paulding.  The 2-6 Panthers lost 49-30 to Columbus Grove last Friday.