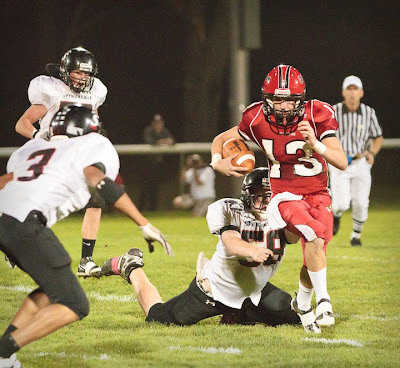 On an absolutely beautiful night, the Bluffton High football team put on a great performance.  The Pirates blanked Spencerville 30-0 for their fourth win of the year behind big plays and a dominant defense.  BHS is now 4-3 on the year and 3-2 in the NWC and won their second straight game.  The Pirates outgained Spencervillle 418-160 and scored some exciting touchdowns along the way.

Jeremy Basinger opened the scoring for Bluffton with a one yard fullback dive just 2:30 into the game.  Drew Luginbuhl found the end zone next for BHS on a 20 yard jet sweep, getting an excellent end seal block from running back Jesse Gudakunst.  Quarterback Hunter Joseph found RJ Stratton for 51 yards over the middle for the next Pirate touchdown, late in the second quarter to make it 22-0.

The final score came early in the fourth quarter after Spencerville had pinned Bluffton at their own one yard line.  After a quarterback sneak to advance the ball to the three, Joseph play actioned to Gudakunst and lobbed a pass over the middle to tight end Matt Lee.  Lee then raced 97 yards for the the touchdown, which is a new school record for longest touchdown pass in a game.  The previous record was 95 yards from John Tabler to Jay Stratton in 1982 against Upper Scioto Valley.

BHS had a balanced running game with Jesse Gudakunst picking up 66 yards on just 6 carries including a 55 yarder.  Keshaun Hughes brought some excitement to the ground game picking up 58 yards on 11 carries with quick bursts.  Hunter Joseph was 9/19 for 248 yards and two scores.  Most importantly the Pirates didn't give up a turnover until late in the game.

Jeremy Basinger, back after a week off with a concussion, was busy with 11 tackles, including two for loss, and flew all over the field as has become his norm.  Jacob Nienberg had a nice game from the defensive backfield with 7 tackles.  Levi Gleason and Jason Myers both had six tackles for the Pirates who seemed to be in the Bearcat backfield all night long.  Spencerville gained just 160 yards on the evening and were completely outplayed from the start by the Pirates.

Bluffton next faces Lima Central Catholic next SATURDAY at 7:00 in Lima Stadium.  LCC defeated Columbus Bishop Ready 41-7 Friday and stands at 6-1 on the season.