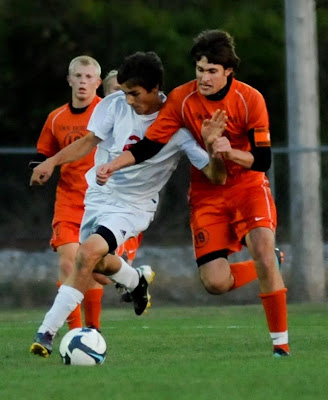 The Pirate ship known as the Bluffton High School boys soccer team entered some rough waters last week in matches versus Van Buren and at Shawnee.  Coming off a previous week when the looting was great against Cory-Rawson and Riverdale, the Pirates have entered a pivotal part of the season.  Not only do the Pirates want to finish strong and find their offensive punch again, but they want to enter the sectional tournament on a positive note.

Tuesday, October 5th the Black Knights of Van Buren came to town.  And when they left, they had a 1-0 victory to their credit.  The game was characterized by a lot of strong midfield play from both squads.  Bluffton outshot Van Buren 10 to 7, but could not capitalize offensively when it was necessary to win the game.

In the opening half of play, the Pirates seemed to hold an edge in controlling the tempo of the game.  But controlling the tempo does not win games.  With 28:06 remaining in the half, Knight Drew Ashcraft was able to sneak a corner kicked ball through an opening in a crowded box for what turned out to be the contest’s only score.  Later, Pirate senior David Hooley just missed a chip shot wide right of the goal with 10:00 minutes remaining in the half.  Forty five seconds later, sophomore Nathan Bunch lofted a ball near the net that junior Lucas Harnish just missed to the left on a header shot.

The Pirates came out listless for the first 17 minutes of the second half.  From then, the contest became quite spirited until the end.  Hooley was denied on a nice shot at the 18:48 mark and then with 8:05 remaining, he tapped a penalty kick to sophomore Matt Deter who lasered a shot towards the Van Buren goalie.  Goalie Tyler McGrain bobbled the shot and eventually smothered it.  Hope lasted until the waning seconds of the contest when Bluffton could not convert a corner kick into a goal with just 35 seconds remaining in the game.

Allowing only one goal in a contest and yet loosing is a tough pill to swallow.  At the end of the game, the Pirates record stood at 4 wins, 8 losses and 1 tie.  It was difficult to decide just how close the Pirates came to winning the game, or wondering what exactly could be done to get the Pirates back on the winning track.