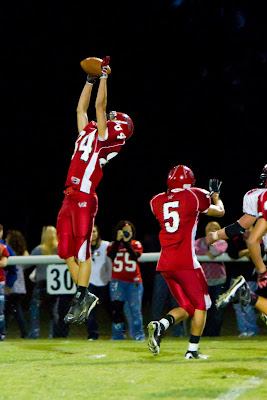 Just like Week 2, the Bluffton High football game was a nailbiter.  Unfortunately, Week 3 didn't end as stylish as last time.  The Pirates' five turnovers were too much to overcome as Jefferson skipped town with a 19-15 victory, dropping BHS to 1-2.

Christian Koch buried a 31 yard field goal in the first drive of the game for Bluffton.  On the second Pirate drive, Jesse Gudakunst dove in on a sweep to the left side to make it 9-0 after the PAT was no good.  Delphos struck back with a 52 yard pass over the middle to make it 9-7.  Bluffton then responded with a long drive capped by a touchdown pass from Hunter Joseph to tight end Kyle Siefker covering 4 yards to make it 15-7 with 5:50 left in the half.  Jefferson cut it to 15-13 with just 1:01 left in the half on another long pass, this one covering 25 yards.

Coming out of the half, Delphos drove down the field in 14 plays to the Bluffton two.  After a false start moved them back five yards, they attempted a pass that RJ Stratton picked off at the three.  Unfortunately, two plays later, the Pirates fumbled in the end zone which was recovered by the Jeffcats for the go-ahead score.  The Pirates weren't able to muster a comeback this time.

Bluffton was held to just 53 yards on the ground and 90 through the air.  The Pirates had five turnovers, but forced five of their own, picking off DJ quarterback Jesse Cano four times.  RJ Stratton had two interceptions, Brandon Deeds had one and Keshaun Hughes made a great one handed stab of a tipped pass as well.  Offensively, Gudakunst led BHS with 32 yards while Drew Luginbuhl had 3 catches for 60 yards.  QB Hunter Joseph was 8/21 for 90 yards, 1 touchdown and 3 picks.  Jeremy Basinger led the way on defense with 13 tackles including a sack.

Bluffton travels to Crestview next Friday to take on the 1-2 Knights.