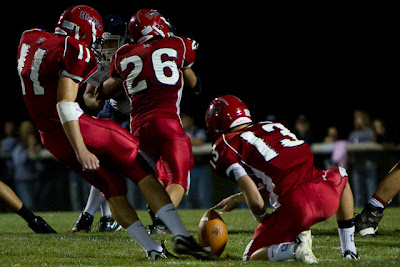 Christian Koch sends the
game winner through the uprights

Moments after a thrilling 31-28 win over a strong Carey squad, Bluffton head football coach Dennis Lee sat in his coaches office and soaked up the moment. “That was fun, wasn't it? That was just some really fun stuff.” Indeed it was. The stadium and town was a buzz following senior Christian Koch's game winning field goal with just one second remaining on the clock. The Pirates, needing a win after surprisingly dropping the opener against Cory-Rawson, made play after play on both sides of the ball in one of the most exciting games in recent years at Harmon Stadium. “We had our backs against the wall. We needed this game. It was great to see our kids stand tall and grind it out. This was a great win,” Lee added.

The ending was nothing short of Hollywood scripting. With 4:26 left and a tie score, RJ Stratton returned a Carey punt 25 yards, highlighted by a bone jarring block from Ben Moser. Bluffton set up shop at their own 40 with the intent to drive down the field and win the game. Unfortunately, after three plays, Bluffton faced a fourth and one on their own 49. The Pirates used up all three timeouts deciding to go for the first down or punt. They decided to punt. Koch boomed a 51 yarder into the end zone and Carey took possession with 2:33 left. After three runs of their own, the Blue Devils faced a fourth and one from their own 29 yard line. Carey lined up to punt but faked it, using the upback as a runner. Brandon Deeds sniffed it out and leveled the ball carrier at the Carey 26 with just 24 seconds left! With no timeouts, BHS needed to be smart with their play calling. The Pirates ran a draw play and Jeremy Basinger advanced the ball three yards to the right hash. Joseph quickly got the troops set and spiked the ball to stop the running clock at 4.9 seconds for Koch to try the game winning 38 yard field goal. The teams lined up, the snap went back and Koch's kick went up...and it was no good. It was well right and well short. However, the Carey defensive end had jumped offside! So the ball was advanced five yards and the Pirates had second life. This time Koch blasted the ball through the uprights as the Pirate faithful went bananas. Lee added, “We took advantage of the opportunities given to us. They made mistakes and we capitalized off them. We made some mistakes of our own that we have to eliminate.”

Bluffton made plays from the opening kickoff, holding Carey to a three and out and following it up with the game's first score. Starting at their own 40, Bluffton drove 60 yards and picked up two key fourth down conversions on the way. BHS ran eight consecutive running plays before airing it out. On a fourth and five, Junior quarterback Hunter Joseph lofted a beauty down the left sideline that RJ Stratton hauled in at the goalline for a 33 yard touchdown. Coach Lee explained, “Carey stacked the box all night with seven guys and it really opened up our passing. We felt we had some good matchups one on one with our receivers against their defensive backs and that's why we kept going to them.”

Joseph was 6 of 10 on passing for 174 yards and three touchdowns as BHS mixed the run and pass. Joseph & Stratton connected four times with three receptions going for touchdowns. The second Stratton touchdown went for 55 yards, this time down the right sideline. The slippery receiver caught the ball at the twenty, juked inside then reversed back out leaving the Carey defensive back on his backside. The last Stratton touchdown came with 10:12 left and tied the game at 28-28. It was a simple seven & out pattern and the Carey defender went for the pick. He was just a hair late and Stratton made the easy catch and glided into the end zone for the score. Joseph found running back Jesse Gudakunst wide open out of the backfield for the two point conversion to tie the game. Bluffton's other score came on the ground on a nifty double reverse late in the second quarter. Joseph handed off to Stratton on a wide receiver reverse headed left. Stratton quickly gave the ball to Brandon Deeds heading right. Deeds made one linebacker miss and scooted into the end zone for a 30 yard score with just 39 seconds left in the first half. This score gave the Pirates great momentum heading into halftime.

Lee was pleased with the improvement of the line play, which resulted in 103 rushing yards and no quarterback sacks against an imposing, aggressive Carey defense. “We played better than week 1 up front, no doubt. Defensively. we'd like to get some more pressure on their quarterback but that will come. We're improving.” Jesse Gudakunst led the Pirate rushing attack with 47 yards on 14 carries. Deeds added 36 yards and a score. Bluffton lost two fumbles but picked off two Carey passes. Drew Luginbuhl went up and nabbed a Devils pass at the Bluffton two yard line in the second quarter. A fumble on the ensuing play was recovered by Carey in the end zone unfortunately. Stratton picked off a Carey pass in the third quarter. Stratton had another interception wiped off the books by a roughing the passer penalty as well. Both Luginbuhl and Stratton broke up passes in the end zone, preserving further damage from the Devils who had some success on long passes over the middle. Carey scored on back to back possessions in the second quarter on an identical play call as QB Bryce Orians found Dustin Massie over the middle for scores covering 46 and 20 yards. Bluffton clamped down in the second half, allowing just a fourth quarter score on a nine yard run by Massie. Brandon Deeds had 9 tackles for the defense. Ben Moser and Logan Sturgill were everywhere from the defensive tackle spots each registering eight tackles. Stratton recorded seven and Jeremy Basinger, Logan Skelly and Levi Gleason each had five.

Bluffton (1-1) hosts Delphos Jefferson (1-1) Friday night at 7:30. The Pirates will be looking to get revenge for last year's overtime loss in Delphos.