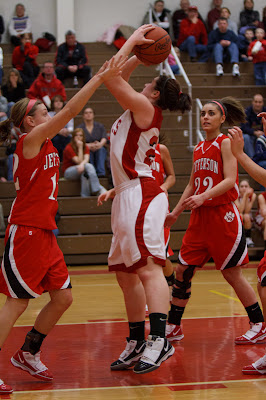 I swear I saw a hurdle or two out there tonight.  Maybe even a high jump bar or a baton.  Bluffton and Jefferson gave everyone an early track season preview as they got up and down the floor of the Treasure Chest, combining for 90 points in the first half alone.  The teams made an incredible 13 three pointers in the first 16 minutes to boot.  Delphos maintained a twelve point halftime lead and won the game 73-56 to improve to 14-3 in the final home game of the season for the Pirates.  Bluffton is now 4-14.

The frenetic pace would normally have favored the deeper Jeffcats but not tonight.  The Pirates' seven player rotation did just fine and kept up with the Wildcats full court pressure throughout the night.  Kristin Klausing, the area's leading scorer in girls hoops, sent a harbinger with a game opening '3' just 20 seconds after the tipoff.  Eight minutes of trapping, pressing, turnovers and bombing away from the outside, Sami Harrod knocked down Bluffton's first '3' to cut the lead to 22-16 heading into the second quarter.

Another fun quarter awaited the fans in the second, as the teams knocked down seven 3s and played some uptempo basketball.  Halfway through the quarter a mini-shootout brokeout.  Klausing stepped back and drained a '3' only to be answered by Harrod with a bomb of her own from the corner off a kickout from Mariah Welch.  The next time down the floor, Taylor Wenger found Harrod wide open and she obliged, knocking down another '3'.  Kluasing then answered with a bomb of her own and followed it up with a foul line jumper.  The teams stayed close and Molly Lengyel's workman offensive rebound and putback with thirty seconds left made the halftime score 46-34 Delphos.

The teams slowed it down a bit in the second half and fouls started to take over the game.  The Wildcats were on a parade to the stripe as they began to go inside rather than settle for the outside shot.  Jefferson shot nine free throws in the quarter, making just four. BHS cut the lead down to eight with 1:15 left but a quick 7-0 sport to end the quarter pushed the lead back out to 61-46.  The Pirates fought to the end, trapping Delphos and still sharing the rock on the offensive end.  A 10-2 run in the middle of the fourth sealed the deal for Delphos.

Klausing, a junior with over 1000 career points to her name, knocked down six 3s on her way to a game high 30 points.  Sami Harrod hit four 3s on her way to 14 points.  The junior also grabbed 7 boards.  The Pirates were balanced.  Mariah Welch scored 13, Lydia Guagenti scored 12 and had 3 big blocks and Molly Lengyel added 10 points.  Taylor Wenger rounded out the Pirate scoring attack with 7 points.  Bluffton has the weekend off and will travel to top ranked Liberty Benton Tuesday night.